I am happiest in the summer, when the sun is warming my skin.  When I’m barefoot and wearing a sundress.  When I’m able to get in my car, open the windows and sunroof, and drive somewhere without cumbersome winter coats, and boots, and mittens, and hats, and scarves.  When I’m not cold.

I am a creature of the sun.  Despite having grown up in Massachusetts, I spent almost ten years of my adult life living in Los Angeles, where I could happily prance around coatless all year long if I really wanted to.  Don’t get me wrong – I wore “fall boots” and cozy clothes during the colder months for fashion and to feel seasonally appropriate, but never out of necessity.  But despite the weather perfection in Southern California, we decided that the East Coast was the right place for us to raise our family.

So here we are in December, 8 years later, and it’s snowing.  The sparkling, powdery stuff that used to delight me as a kid is not so delightful these days.  In fact, I now hate the snow.  HATE.  There are a bunch of reasons why, like the fact that I can’t stand winter coats, warming up my car for ten minutes before going anywhere, inconvenience, or being cold.  But the girls’ eyes absolutely light up at the first snow, and I know I’m in for it…

Playing outside in the snow.

I know it sounds harmless.  But let me educate you if you have never played outside in the snow with very small kids.  It’s freezing.  It’s wet.  It takes 45 frustrating minutes to get everyone into all their layers of snow gear, some of which is always too small or too big.  It’s slippery.  And there’s this when it’s all over:

A wet, messy pile of more stuff to do.  More things to add to all the other things when you really just want to snuggle under a blanket on the couch with a cup of tea and a movie.

There is this frown when your 5-year-old realizes that her boots are full of packed in, cold snow, but she hadn’t noticed outside because she had been  having too much fun playing “Elsa and Anna’s Ice Palace” with her sister.

So why do I do it?  Why don’t I bribe them to stay inside with promises of hot chocolate with marshmallows, tablet time, and movies?  Well, my childhood memories of playing in the snow are happy.  Maybe even magical.  For a kid, there is almost nothing better than the carefree feeling of running through a yard covered with a fresh blanket of clean, white, glittery, delicious snow.  It means snow angels, snowmen, snowball fights, and imaginative play.  Something I hadn’t realized was that to Lane and Lauren, it means something even more special.

See, last year at Mother’s Day, Lane made me a present at school.  It was a frame she had decorated with sequins and gems.  Inside it was a picture she colored and a list that her pre-school teacher helped her complete.  There were all kinds of things about me – like things she thinks I’m good at (going to the gym was what she said – she must have made it during the one week I went to the gym last year), things I always say to her (“I love you” – so glad it wasn’t “Hurry up!”), and then there was one that really got me.  It said “My favorite memory with my Mom.”  And next to it, she wrote, “When I was really little and it snowed really high and my mom made snow angels with me.”

In that moment, I knew that sucking it up every year and facing the brutality of snowsuits and icy puddles in the kitchen was going to be my reality each winter until the girls didn’t want to do it anymore.  Because to them, playing in the snow with me is part of the fabric that’s becoming their childhood.  So, as much as I will continue to dread so many things about winter – one thing will warm my heart: knowing I’m making my kids happy.

Now… how many more days ’til summer? 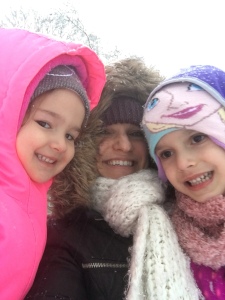